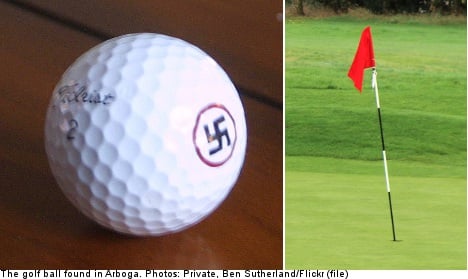 Christer Nyström was playing an early round on Saturday morning at the Arboga golf club in central Sweden when a wayward golf ball went sailing into the rough.

“We were on the third hole, looking for the ball and I was in the high grass. I found another ball instead and realized it had a swastika on it,” Nyström told The Local.

“I was naturally surprised at first, but then I became quite shocked.”

Nyström was playing the day after a busy tournament, although it remains unclear if the ball was left behind from a professional player.

“I find it hard to believe that the ball came from us. For us, the competition is so important that a player wouldn’t leave a ball in the rough,” tournament organizer Jesper Edström told the Nerikes Allehande newspaper.

Meanwhile, the professional appearance of the printed swastika has raised questions of its own.

“The ball is a Titleist – a really professional and expensive ball. The symbol looks as if it’s been professionally done, someone has put a lot of work into this,” Nyström said.

A spokesperson for Titleist however, has explained that the company does not produce any such balls.

“We certainly didn’t print it,” Calle Thelin, responsible for all Titleist logos in Sweden, told The Local.

“Everything that gets printed on a Titleist golf ball in Sweden comes through me – I’d be fired immediately if I allowed something like this through… it definitely has nothing to do with us.”

Thelin however admits that the ball does indeed appear to be of the Titleist brand, and speculates that someone most likely bought the ball and imprinted their own insignia.

As for the ball itself, Nyström is glad to put the whole thing behind him.

“The whole thing was very peculiar, but I didn’t want to keep ball so I handed it over to the club,” he told The Local.

The swastika, an equilateral cross with four arms bent at right angles, was used as a symbol of the Aryan race by the Nazi Party of Germany from as early as 1920. It has also previously been used in various ancient civilizations around the world as a tantric symbol.