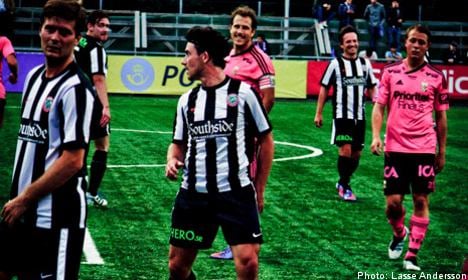 Almost 700 fans turned up in Stockholm to see the game, with the vast majority supporting the Stockholm side, however the raucous and non-stop cheers of the crowd were not enough to claim a victory for Långholmen, who lost 0-9.

CLICK HERE FOR A GALLERY OF PICTURES FROM THE MATCH

The Local chatted to club captain Andy O’Sullivan after the game about taking part in what many dubbed as football’s David and Goliath match of the year.

The Local: How would you describe the team’s mood after the game?

Andy O’Sullivan: It was celebratory, there was an overwhelming feeling of pride, and positivity about the future. We all went for a few beers and watched the report on SVT Fotbollskväll and it got a huge cheer! It was bizarre that Manchester United versus Everton was on one TV and Långholmen FC vs IFK Gothenburg was on the other!

The founding members of the club were all in attendance… and I think for them it is a rather surreal dream come true. To see what they have built over 10 years… from having a kick around in the park to playing a competitive match against Sweden’s most successful club IFK Gothenburg.

TL: What was the reaction to the huge turnout and all the international interest?

AO: The atmosphere at the game was electric. All the fans and friends of the club have been revelling in the wider press coverage. From The Guardian to the BBC, The Sun and the national radio, La Stampa in Italy and beyond – the feedback and response to our achievement have been universally positive.

It’s true that LFC has been mentioned as the antidote to the corporate commercially-driven Premiere League on offer. The romance around this game has captured the hearts of a lot of people. We have received well wishes from all across the globe, and I think the fans last night showed what a special club LFC is.

TL: What were the highlights of the match for you?

AO: The players worked so hard, and really gave it everything. Gothenburg came here to do a job and played their first eleven. They showed no mercy and punished us at the end of the game when we were tired. I think it is a credit to the Gothenburg players that they gave us a lot of respect and took the game seriously.

Speaking to Tobias Hysen after the game, he said that they enjoyed games like this too, a game with a real story behind it.

For us, Chris Allen did great in goal despite the score line, and the two centre-backs Andy Mclelland and Ciaron McCormack were outstanding. The whole defence stood up to immense pressure and the squad acquitted themselves very well. It was difficult to keep the ball and match the physical performance level of the Gothenburg players, but we had a little spell in the second half where we managed to keep the ball and maintain our shape.

TL: Was the final score an accurate reflection of the match?

AO: I think 0-9 is a harsh result. They scored in injury time in the first half and 3 goals in the final ten minutes of the game. Obviously the lads were exhausted and this just shows the level of fitness between the professional teams and the rest. They clinically punished our mistakes, and we have no complaints. But I thought 0-6 would have been a fairer score line… one goal for each league between us.

TL: What next for the club?

AO: Onwards and upwards. We have a league match on Thursday night as we fight to stay in Division 4. This is a local derby against FC Krukan, and a very important match. I hope as many fans come down to cheer us on again: Kick off 2000 @ Essinge IP.

Below: Watch as Långholmen fans keep the crowd entertained at the match behind the linesman’s back.