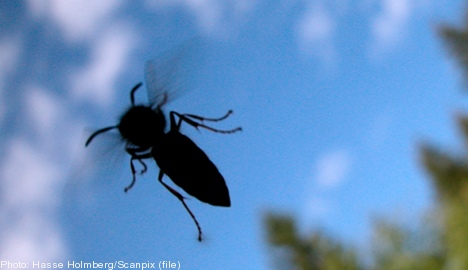 The menace from above?

“We had the children examined on site and two of them were then taken to hospital for treatment,“ said Monica Grandin of the SOS alarm emergency services to local paper Göteborgsposten (GP).

The emergency services received a call round 2pm on Thursday that some twenty school children from a nearby school had been attacked by wasps and badly stung while playing in the school grounds, according to the paper.

Five ambulances and a medical vehicle were dispatched and medical staff examined all the affected children to see who needed further medical attention.

Two of the children had to be taken to a local hospital for treatment.

According to GP, the principal of the school, Carin Edvardsson, had been in a meeting on Thursday but said that as far as she knew, the whole thing had been handled well by teachers.

The hospital was unwilling to disclose any further particulars as to how badly stung the two children were, but Edvardsson said she’d know more over the course of Friday.

“Then we’ll be able to give more details about what actually happened and how the children are doing,“ she said to GP.