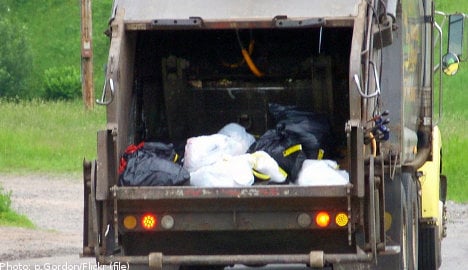 “At one point he was lying hidden in a dumpster full of trash that they were about to empty,” said Egon Persson of the Motala police to daily Aftonbladet.

According to police reports the man has previously hitched a ride with the trucks by jumping on at the back when the drivers weren’t looking. The man is known by police and among the drivers for similar incidents.

“Sometimes he hangs on at the back of the truck, without the driver’s knowledge. Sometimes he climbs up on the roof of the vehicle,” said Persson to the paper.

The local authorities, who employ the bin men, are also aware of the man’s strange fascination with all things garbage.

“He likes to lie on the roof of the truck and film the men at work,” said foreman Per Andersson to Aftonbladet.

Andersson said that it was only by sheer luck that the garbage collectors discovered the man as he was lying in the skip. If they hadn’t, he could have been seriously injured.

After a slew of similar incidents, the municipality finally filed a police report and informed all the drivers about the man’s activities so that they can remain vigilant.

According to Andersson, the man’s garbage fascination is not triggered by an interest in environmental issues or similar.

“No, this is a sick man. He has an enormous interest in rubbish and our work,” said Andersson to the paper.