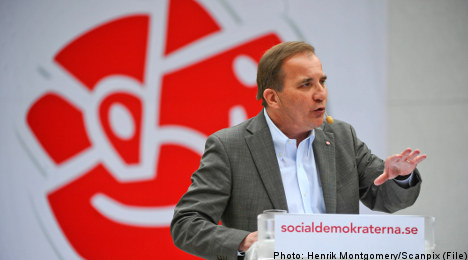 The shrinking support for the Social Democrats is partly explained by a significant rise in voters who would choose the Left Party if the election was today. The left-wing party has increased its support by 1.8 percentage units to 6.2 percent.

Others who formerly sympathized with the Social Democrats are now uncertain of where their allegiance lies, as the category “uncertain” has ballooned up from 11.9 to 15.1 percent.

Among the currently governing centre-right parties, not much has changed. The Moderates continue to be twice as large as the three other parties combined. With 3.4 percent of voters backing them, the Christian Democrats have once more landed below the 4 percent cut-off line required for representation in the Riksdag.

The Centre Party also hovers near the cut-off, landing on 4.6 percent, according to the survey conducted by research institute Sifo and first published in the Svenska Dagbladet and Göteborgs-Posten newspapers.

With the combined support of 50.4 percent of voters, the Social Democrats, the Left Party and the Green Party remain larger than the centre-right Alliance, although the gap has shrunk somewhat. The four parties in the Alliance land on 42.7 percent voters’ support.

Support for the Sweden Democrats increased by 0.8 percentage units to 6.2 percent.

The only statistically certain change is the shrinking support for the Social Democrats, and the Left Party’s growth.