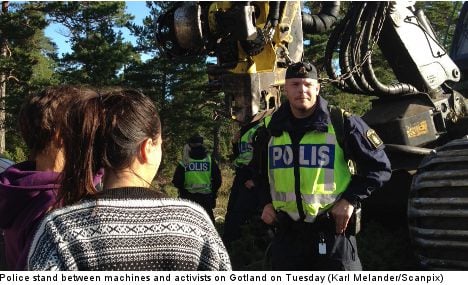 Several police vans escorted tree-felling machines into the Ojanre forest in an effort to keep the activists, which have been demonstrating since early August against the quarry planned by the Nordkalk mining company, from blocking the machines’ path.

“They’ve blocked off the road and they’re standing in front of the car when we attempt to drive. But others have begun walking to the area,” Maria Tranvik, an activist with environmental group Fältbiologerna, told the TT news agency.

Around 70 officers from Stockholm were brought in to help keep the protesters from disrupting operations planned near Bunge on northern Gotland.

Nordkalk initially received permission in 2009 to mine limestone in the area, but work has been delayed by a number of legal appeals focusing on potential harm the work might cause to the island’s water supplies.

“We have to show that we are ready to stand up for our island and that we needed water for the future, that this is total madness,” Gotland resident and protestor Bertil Ström told Sveriges Radio (SR).

Demonstrators claim that on Monday, police told them that tree-felling work would commence at 7am on Tuesday morning.

“But they chose another road and came around 6am,” said Tranvik, who expressed her disappointment over how the police conducted their dialogue with activists.

With police holding the protesters at bay, workers have now begun to saw down trees in the Ojnare forest.

However, some activists continued to try to block the sawing by holding hands to create a ring around tree-felling machines, according to a Scanpix photographer on the scene.

Meanwhile police are working to ensure the demonstrators keep a safe distance from the machines.

According to Tranvik, the atmosphere remains peaceful.