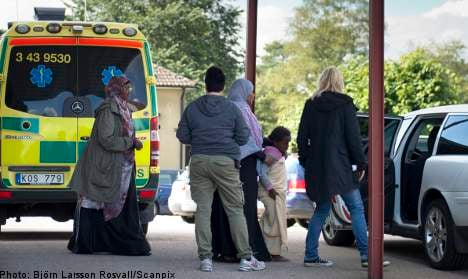 “She has been found. She feels good. She was a little dirty, but she didn’t answer when I asked in Somali how she felt,” said Sudan, a man who was present when the girl was handed over to police by the family that found her, to Sveriges Radio (SR).

The girl, Kalif Bushra, was found around midday walking along a path two kilometres outside Gislaved, and was immediately driven to the local police station.

Police are still eager to speak with the girl to find out more about the circumstances of her disappearance.

“But it takes a little time. She’s only six, so we’re taking it slowly,” said Jan Lagerqvist of the local police to the TT news agency.

Furthermore, the girl does not speak Swedish – only German and a bit of Somali.

The girl was taken to a doctor soon after she was found, accompanied by her mother.

Details remain sketchy about the girls disappearance, and indeed about how she spent the rainy night in Gislaved.

The six-year-old was last seen playing in a school park at 1pm on Tuesday, and police were alerted around 5pm, launching a search party that worked throughout the night and morning.

The girl is originally from Somalia but lives in Germany, and was visiting relatives in in Gislaved with her mother and sibling.