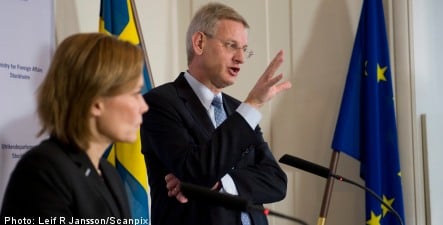 “One thing is clear, the secular Syrian dictatorship the Baath Party created will not survive,” Bildt said in a speech in Stockholm, a copy of which was released to the media.

“But whether it will be replaced by a secular democracy, an Islamic one or by a sectarian fragmentation remains to be seen. The longer the conflict lasts, the greater the risk that we will see the latter development,” he said.

“There are great risks in this. We see already how tension is building between Shiites and Sunnis in the entire region. And those who think that they can play on these in a bid to try to weaken Iran are really playing with fire,” Bildt warned.

He did not specify to whom he was referring.

Bildt noted that the influx of Syrian refugees to Sweden was on the rise, and said the Scandinavian country already counted “50,000 people of Syrian origin, primarily from various Christian denominations.”