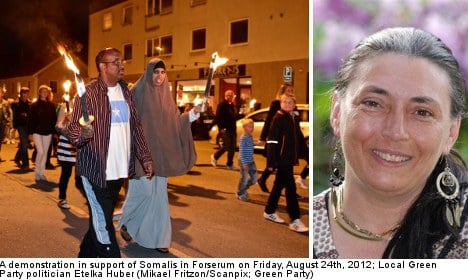 That parents living in Forserum in Nässjö municipality didn’t dare let their kids go to school for fear of reprisals is a tragedy.

It’s a serious situation with racist aspects. This is nothing new, but rather appears to have been going on for a long time.

Last year there were 160 Somalis there and many have moved away because of xenophobia.

What has happened in Forserum is horrible but unfortunately not entirely unexpected. Matters there have been smoldering for a long time and the situation is complicated.

Of course the thugs who have been reported to the police ultimately bear responsibility, but the issue is much more complicated than that. Moreover, the events are the result of a failure on the part of municipality.

Forserum is a small community of about 2,000 inhabitants. It has received 160 of a total of 320 to 360 refugees who have come to Nassjö municipality.

This in itself is a dilemma.

The Swedish state bears the financial responsibility for newcomers for the first two years after their arrival. After that, municipalities take over responsibility.

This presents a potentially huge financial expenditure on the part of Nässjö if these people don’t find jobs. Failing to build networks and platforms for new arrivals leads to social exclusion for those involved and a financial hit for the municipality.

This requires political leadership and expertise.

Now, apparently, the number of Somalis in Forserum is around 60. As it stands, the racists have won the upper-hand. They have managed to scare many away.

The question is how Nässjö’s local political leaders will choose to act going forward.

Social Democrat Bo Zander and his friends in the local council’s governing majority, which includes the Left, Centre, and Liberal parties, need to do a great deal to prevent similar situations from occurring in the future.

In addition, the issue of integration needs to be higher on the political agenda.

Local council member Anders Karlsson of the Centre Party should use the right name when referring to the actions of these gangs – namely, racism. The use of euphemisms to try to downplay the situation using words is cowardly.

Perhaps Karlsson and his friends in the leadership of Nässjö don’t want the municipality to be portrayed as a nest of racism.

But if the victims experience the situation as xenophobic, that’s what it is.

Trying to explain it away is like once again spitting in the faces of our Somali friends. But this time by a blazer-wearing, well-groomed, big-shot local Centre Party politician.

Unfortunately, Forserum, in Nässjö municipality, in the highlands of Småland in south central Sweden is not unique. The only thing unique is here there is a group of thugs who, through beatings, stone throwing, spitting and other methods, have been physically harassing Somalis.

Those who silently watch also carry a responsibility. But political leaders’ responsibilities are greater. Social exclusion creates barriers, which in turn lead to tensions and xenophobia.

It is time to break this chain.

Etelka Huber is a local Green Party politician in Nässjö municipality and a member of the local council as well as a substitute member the municipality executive board.

This article was originally published in Swedish on the Newsmill opinion website.