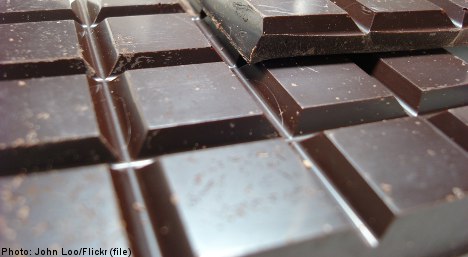 The study, undertaken by the Karolinska Institute and published on Wednesday in the Neurology medical journal, showed that men who indulge in 60 grammes of chocolate each week had a 17 percent lower risk of stroke than others.

“While other studies have looked at how chocolate may help cardiovascular health, this is the first of its kind study to find that chocolate may be beneficial for reducing stroke in men,” said study author Susanna C. Larsson to the journal.

The effect is the same regardless of whether the chocolate is light or dark.

However, scientists as yet have been unable to explain the link between the chocolate consumption and the reduced risk of stroke, but the most likely reason lies in a type of antioxidant found in chocolate.

“The beneficial effect of chocolate consumption on stroke may be related to the flavonoids in chocolate,” explains Larsson.

“Flavonoids appear to be protective against cardiovascular disease through antioxidant, anti-clotting and anti-inflammatory properties. It’s also possible that flavonoids in chocolate may decrease blood concentrations of bad cholesterol and reduce blood pressure.”

37,000 men aged between 49 and 75 were quizzed about their chocolate habits ten years ago, with reseachers comparing the patients’ medical records to assess a potential correlation.

33,000 women were surveyed, and scientists discovered that stroke cases were also fewer among the one-fifth of the women who ate the most chocolate.