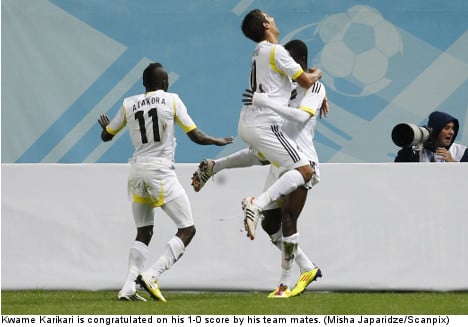 CSKA dominated the opening minutes of the match until AIK striker Kwame Karikari scored the team’s first goal in the sixth minute, which levelled the aggregate score at 1-1 after the Russians’ narrow win in the first leg in Stockholm.

After a second goal by AIK’s Martin Lorentzson in stoppage time, which put the Stockholm club up 2-0 and assured its advancement to the next round of the Europa League tournament, the team could hardly contain its excitement.

“It feels ecstatic. There’s no other way of putting it,” Lorentzon told the tabloid Expressen after the match.

“We thought we could do it, and we did. It’s fantastic”, AIK’s star striker Nebojsa Novakovic told the TT news agency.

2005 UEFA Cup winners CSKA Moscow had 31 attempts on goal, but they could not get the ball past Swedish keeper Ivan Turina.

“He rescued at least four to five situations which not many keepers would have been able to do.”

The game – dubbed the “Miracle in Moscow”- was described by Swedish press as the biggest feat by a Swedish club football in the past decade.

AIK’s unexpected success in Europe comes a day after Helsingborg, the reigning Allsvenskan champions, were knocked out of Champions League play by Celtic, which secured a convincing 2-0 home win against the club from southern Sweden.