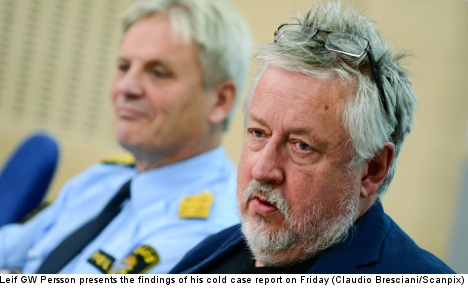 Persson believes that 300 out of 430 unsolved cases that occurred between July 1st 1985 and December 31st 2010 deserve further attention.

About 25 of these cases could be resolved, the report says, and in several cases police have secured forensic evidence tying a perpetrator to the crime, but the suspects have not yet been found.

The statue of limitation for crimes punishable by lifetime imprisonment and committed after July 1st 1985 was abolished in July 2010.

These include cases of murder and manslaughter.

Sweden’s national police commissioner tasked Persson with compiling a list of all unsolved cases of deadly violence that were not barred by the statute of limitation.

“Of the cold cases about 75 percent occurred in the major cities,” Persson said at a press conference on Friday.

“That is an overrepresentation.”

The national police commissioner, Bengt Svenson, told the press that the National Bureau of Investigation (Rikskriminalpolisen) and the National Police Board (Rikspolisstyrelsen) will make a joint decision regarding which cases to re-open.

Persson mentioned several complications he faced in summarizing the material.

It was difficult to find the cases in the first place, he explained, since there is no central registration.

In addition, a great deal of important evidence has been disposed.

The pile of unresolved cases is expected to continue to grow because of the dropped statute of limitation. But Svenson is not worried about the costs for police work surging.

“It won’t happen if get our priorities straight. And we can never say that a murder is too expensive to investigate if it is possible to resolve it,” said Svenson.

He has taken part in several neo-Nazi demonstrations over the past few years and has also expressed support for the extreme right Alternative for Sweden party on social media, the Expressen newspaper reported.

The man stabbed a woman in the upper body at the Donners plats square only a minute’s walk from the stage where all eight of Sweden’s parliamentary party leaders are making speeches this week at the Almedalen political festival. The women is being treated for severe injuries at the Visby Lasarett hospital.

The 30-something attacker fled the scene but was stopped and arrested by Lars Reuterberg, a 69-year-old pensioner.

Reuterberg told the TT newswire that he had heard someone shout “stop him!” and then seen a man jump over a fence from the corner restaurant.

“I thought he’d nicked a bag or something, and my spontaneous reaction was ‘I should take him down’. He wasn’t such a big guy, certainly no bodybuilder, so I tried to look a little uninterested, but when he came near me he ended up on the end of mighty great shove.”

The man flew into a door and then just lay here. “It was only then I saw that he had a knife, which I hadn’t known earlier, because then I might have acted differently,” he said.

“I’m livid now,” he went on. “This is the world’s most unique political week, a people’s festival where you can meet politicians and celebrities and everyone says ‘hi’, where there are journalists and everything. And this nutter goes and wrecks it all.”

“I’m quite proud of myself,” he admitted. “I was never afraid. I’m afraid now for the woman who got stabbed.”