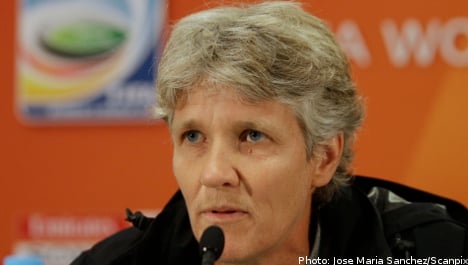 “It is a dream which is being realized to coach my home nation Sweden,” Sundhage told Sveriges Television (SVT).

Sundhage has had a hugely successful time in the US guiding the team to back-to-back Olympic gold medals and a World Cup final appearance and said on Saturday that she will miss the US team.

“I want to thank all the players and all of my assistant coaches for making me better,” Sundhage said in a statement released before her side trounced Costa Rica 8-0 in a friendly to launch their post-Olympic “victory tour”.

“Before I took this job, I always admired the spirit and character of the US team, but to experience that first-hand on the training field and from the bench as their coach was truly special and something I will treasure for the rest of my life.”

Sundhage said however that she was looking forward to the new challenge after being offered the chance to replace Thomas Dennerby who stepped down last month after eight years at the helm.

“I am taking the chance for a new challenge with other players and another association. It is going to fantastic fun,” she said to SVT.

As a player, Sundhage led Sweden to the title at the first European Women’s Championship in 1984 and the bronze medal at the inaugural Women’s World Cup in 1991.

She finished her 22-year international career with 71 goals and the US job was her first as a coach.

Since Sundhage took over in 2007 the Americans have reached the final of all three major tournaments they entered. Their 2-1 victory over Japan in the London Olympics final was a rematch of the 2011 World Cup final and avenged the most painful defeat in team history.

US Soccer officials said they would start looking for a new coach immediately but set no timetable for naming a successor.

Sundhage is expected to stay with the US team for at least the next two matches of their victory tour, a pair of friendlies against Australia on September 16th in Carson, California, and September 19th in Commerce City, Colorado.