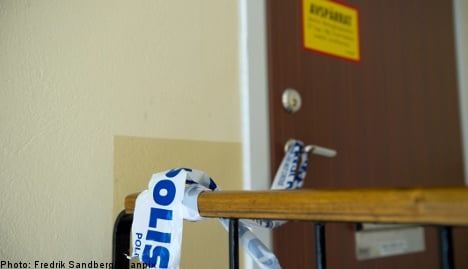 Police received a call about the murder at around 3.30pm on Saturday afternoon in central Täby. Two men, aged 31 and 28, were arrested around 30 minutes later in the vicinity of the crime scene.

The men were detained on suspicion of murder and accessory to murder.

Neither of the men have any previous criminal record.

The murder is reported to have occurred inside a block of flats.

According to Anders Gillander at Roslags police, the forensic investigation continued into Sunday morning.

The arrested men are reported to be neighbours of the murdered girl.

“One of them anyway,” Gillander said.

Witness interviews have been conducted during the evening, but Gillander was unwilling to divulge any further details about the murder.

According to him the police have a clear picture of how the murder was carried out and underlined that it is not a case of a so-called “honour killing”.

“There is no indication of that,” he said.

When children under 15-years-old are found murdered, in 90 percent of the cases the assailant is a parent, according to Mikael Rying, a criminologist at Mid Sweden University.

“It is a very unusual murder if it is shown to be the neighbour who has committed it,” he told the TT news agency.

He added that it is very unlikely to have been a neighbour unfamiliar to the girl.