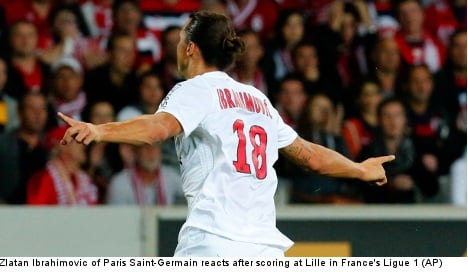 PSG’s Qatari owners must have been getting restless after seeing their expensively-assembled team limp to three draws in their opening three games, but their signature summer signing Ibrahimovic was the star of the show at Lille’s impressive new Grand Stade.

Coach Carlo Ancelotti responded to an impotent attacking display in last Sunday’s goalless home stalemate against Bordeaux by restoring Marco Verratti and Jeremy Menez to his starting line-up, and the latter provided a fine assist for the opening goal, which arrived after just 27 seconds.

His cushioned pass allowed Ibrahimovic to slot past Lille ‘keeper Mickael Landreau from the left-hand side of the area to give the visitors a dream start.

However, Lille responded like a side whose confidence had been buoyed by their midweek win against FC Copenhagen which took them into the Champions League group stage, and they were level 11 minutes later when Aurelien Chedjou stole in front of Ibrahimovic to head home a corner.

But the super Swede beat the outrushing Landreau to a Javier Pastore through ball and fire PSG back in front midway through the first half for his fourth goal in Ligue 1, and the capital club held on to their 2-1 lead for the remainder of a keenly-contested encounter.

“We were well organized in defence, there was a good attitude, a great counter-attacking game and the fantastic skill of Ibrahimovic,” said Ancelotti.

“It’s a massive win, we were victorious on a tough pitch (to win) against a strong team.”

The Italian added: “To build a team like we want is not easy. But I don’t think that all the problems are solved. Naturally, a win can lend us a lot of confidence. We can use this match and victory to build a better team.”

PSG are six points adrift of leaders Marseille, however, after OM continued their perfect start to the campaign thanks to a 3-1 home victory against Rennes at the Stade Velodrome.

Ibrahimovic, who joined PSG in mid-July after capturing Italy’s Serie A scording title with AC Milan, has been the only play to score for his new club so far this season.