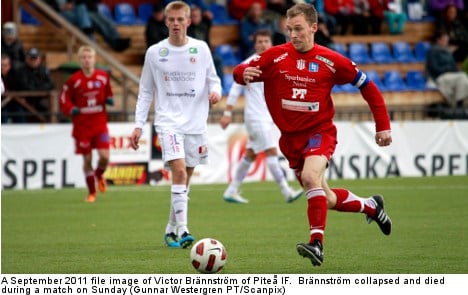 Victor Brännström of Piteå IF put his club up 1-0 in the fourth minute of Sunday afternoon’s Division 2 North match against Umedalen in northern Sweden.

Three minutes later, he lay motionless on the pitch.

“He was totally unmarked and was jogging back when he just collapsed,” Piteå IF spokesperson Christer Berglund told the Aftonbladet newspaper.

“People ran out to him right away and within 20 seconds I’d called for an ambulance.”

Brännström was rushed to hospital as paramedics attempted to resuscitate him, but they were unable to revive the young footballer.

News of Brännstrom’s death left his teammates in shock.

“It was totally silent. Unreal. You could hear the hum of the electrical outlets. Then when the news of [Brännström’s] death came, there were some who sobbed and others who became enraged,” Berglund told the paper.

According to Berglund, a team meeting scheduled for Monday will have counselors on hand to help Brännström’s teammates deal with his unexpected passing.

The fatal incident wasn’t the first time Brännström had collapsed while playing football, however.

Last winter, the 29-year-old fell to the ground during a training match, but came to shortly thereafter.

A subsequent battery of tests failed to reveal any abnormalities, however, and Brännström was cleared to continue playing.

After retiring last spring, Brännström decided to return to Piteå IF during the summer, but his death on Sunday has raised questions as to whether more could have been done.

“You assume the health officials did all the right tests, but you wonder why they didn’t find anything,” said Berglund.

“Obviously, you want to know, but things are as they are. We can’t undo what’s been done.

“He was a healthy and damn nice guy with a wife and two kids. It’s horrible and traumatic.”