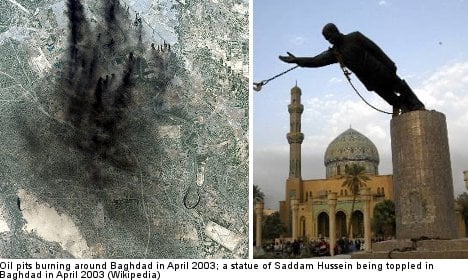 According to a report in the Expressen newspaper, which obtained previously classified documents from the US military’s Central Command, a Swedish intelligence agency helped US war planners determine which targets to hit in a bombing raid to be carried out in March 2003.

Specifically, the US military was interested in learning more about Swedish-built bunkers in the Iraqi capital as the Pentagon suspected that one bunker, which was officially a safe room for civilians, may have also been used by the Iraqi military or the country’s leaders.

The document explains that the US military obtained data about the bunkers through “intelligence exchanged with Sweden and the U.S.”.

Last autumn, Expressen reported that high-ranking US military experts made a secret visit to Sweden in January/February 2003 to meet with officials from Swedish military intelligence agency MUST, reportedly to discuss the bunkers.

The revelations prompted a Swedish prosecutor to launch a preliminary investigation into whether a single employee with MUST gave secret information to the Americans.

However, the probe was shuttered after the prosecutor concluded that no espionage had taken place.

At the time of the Swedish-US intelligence cooperation detailed in the document, Sweden’s Social Democrat-led government had pronounced its opposition to any invasion that wasn’t sanctioned by the United Nations.

Following the March 20, 2003 bombing raid which marked the start of the Iraq War, then Swedish prime minister criticized the US-led invasion as “unfortunate”.

“For starters, they acted without the support of the international community,” he said the day after the attack, according to Expressen.

“Unlike the United States, Sweden views a military attack on Iraq without the support of the UN Security Council as a breach of human rights.”

Revelations that a Swedish intelligence agency was aiding the United States conduct a military operation which had been condemned by the Swedish government prompted former Left Party leader Lars Ohly to call for a further probe into the matter.

“If Sweden facilitated an attack, that would be very strange,” he told Expressen.

“If a Swedish agency acted without the government’s knowledge or permission, that’s serious because that means the government doesn’t have control over its public agencies.”

Former Prime Minister Göran Persson told Expressen he “has no recollection” of being informed about intelligence cooperation between Sweden and the United States in the lead up to the Iraq war.

Political scientist Ulf Bjereld said the claims made in the Expressen report touch on “an important issue which must be examined”.

“If it’s a question of MUST offering the sort of information indicated in the document, it’s important to know of it happened after MUST interpreted instructions themselves, or if the government gave the go ahead,” Bjereld told Expressen.