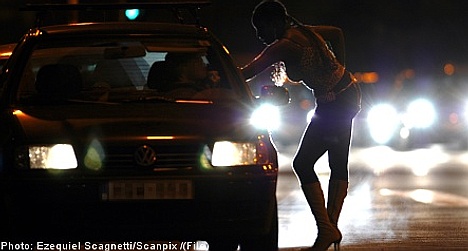 “A few years ago most of the arrests were in hotels, but this has changed. Today the majority of our hits are in normal apartments,” explained Simon Häggström of the Stockholm police to the Metro newspaper.

The homeowners, who are often renting their flat while they’re away on holiday, are completely unaware of what’s going on behind their own closed doors.

“When we have localized the women who sell sex at some address it is often discovered that the house belongs to a completely normal family who is away on holiday, and who doesn’t have the slightest intention of renting it out to prostitutes.”

The police explained that the sex workers are hard to catch, as they are often only working in each home for a short period of time, however the investigations are made easier by tips from the public.

Such tips can come from disgruntled and unsatisfied customers, neighbours, or even other prostitutes who are competing for business.

One woman, named by Metro as Sara, unknowingly rented her apartment in central Stockholm to a prostitute. She didn’t find out until returning to Stockholm and finding a message from the police.

“It felt disgusting. I wanted to just burn the bed and move house,” she told the paper.

Later, the homeowner used Google to check the tenant’s phone number and discovered an array of sexually explicit images together with a price list: 2,000 kronor ($302) for an hour, 1500 kronor for 30 minutes, and 1,000 kronor for oral sex.

However, while the incident at Sara’s apartment is yet to lead to any arrests, the homeowner herself has come to question exactly who suffers from the ruse.

“When you get a little perspective on things – I’m not actually the victim here. I think of how the girls have ended up as prostitutes, whether they’ve been exposed to people smuggling and how they live today,” she told the paper.