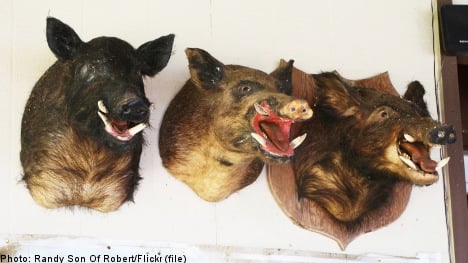 Three animals so far have been found dead and decapitated in southern Skåne: a roe deer buck, a red deer, and a wild boar.

Ystad police are stumped but suspect that one person may be behind all three grisly kills.

“As the hunting occurred in the same area there is reason to suspect a connection. But it’s usually hard to find out who is responsible,” said the police’s Hasse Persson to the local Skånska Dagbladet newspaper.

“We have not had something like this before, where the poacher only takes the trophy.”

The animals were found in the northern part of the Ystad municipality, just south of Sjöbo, with the only lead for local police being tracks found at one of the kill sites.

Berth-Ola Jönsson, a hunter who owns the land where one of the deer was shot, thinks this hunter’s actions are “deplorable”.

“Us hunters shoot only the older animals – our work is about breeding. It’s also idiotic to only take the head and let the incredibly fine meat sit there and rot,” he told the paper.