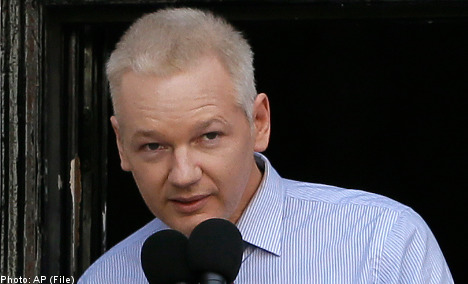 Addressing parliament, Hague also said Assange could not be extradited from Sweden to a third country without Britain’s consent, which would not be given if there was a prospect of a death sentence being imposed.

Assange took shelter in the Ecuadorian embassy in London in June after exhausting all appeals against extradition from Britain to Sweden, where he is wanted for questioning over sexual assault allegations. Ecuador has granted him diplomatic asylum.

The 41-year-old Australian fears Sweden will hand him over to the United States, where he could face prosecution over the release of a vast cache of leaked Iraq and Afghanistan war reports and diplomatic cables.

“We wish to continue our dialogue with the government of Ecuador,” Hague said in a written statement to parliament.

“We believe that our two countries should be able to find a diplomatic solution.

“We have invited the government of Ecuador to resume, as early as possible, the discussions we have held on this matter to date.”

“The suggestion that there would be a risk of a breach of Mr Assange’s human rights on extradition to Sweden is completely unfounded,” he said.

“The suggestion that Mr Assange’s human rights would be put at risk by the possibility of onward extradition from Sweden to a third country is also without foundation.”

Sweden, under the European Convention on Human Rights, would have to refuse extradition in circumstances that would breach Assange’s human rights, and would also be “legally obliged” to seek Britain’s consent before any extradition to a non-European Union country.

“Our consent may only be given in accordance with the international conventions by which the UK is bound,” Hague said in his statement.

Britain could only consent to Assange’s onward extradition if it was satisfied that his human rights would be upheld, “and that there was no prospect of a death sentence being imposed or carried out,” he said.

Britain held seven formal discussions and several other spoken and written exchanges with Ecuador “in order to seek an acceptable resolution to this situation”, Hague said.

He said Quito had been reminded that article 41 of the Vienna Convention on diplomatic relations obliges embassies to respect the laws of the host country and “these include the duty not to impede the due legal process of that state”.

Hague said that while Ecuador was party to the 1954 Caracas Convention on diplomatic asylum, London was not and therefore was not obliged to meet Quito’s request for safe passage out of Britain for Assange.

A spokesman for the Ecuadorian government in London later said Hague’s statement had not assuaged their fears.

“What the UK government have failed to address over the last three months, including today, is the inhumane treatment that Mr Assange would face were he to be extradited to the USA,” said the spokesman, according to Britain’s Press

“The Ecuadorian government would welcome cast iron guarantees from the UK government that will make sure that the fate that has befallen Bradley Manning will not be meted out to Mr Assange,” he added.

Ecuador has said Britain had threatened to storm its embassy and seize Assange, but Hague said: “I have been consistently clear that we are not threatening the embassy of Ecuador.”