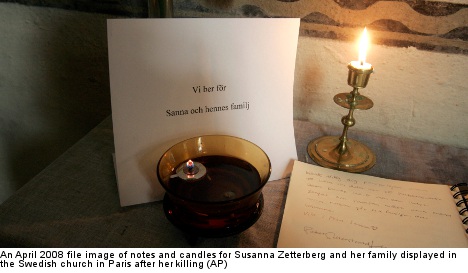 “The accused is naked,” the gendarme responsible for bringing Bernard Cholet, 55, into court was obliged to tell judge Xaviere Simeoni following a 90-minute delay in the start of proceedings.

“Can’t you put him in a straitjacket,” the exasperated judge snapped before warning: “He can appear naked if he wants and he will be charged with exposing himself.”

The judge’s firm tone had the desired effect. Cholet, who was in a holding cell, duly got dressed and took his place in the dock.

The accused was taken sick on the opening day of the trial and has since been staying in hospital, where he claims not to have been fed properly. Friday’s protest followed a request for him to be returned to prison.

Cholet, who has previous convictions for rape and armed robbery, is accused of kidnapping and killing Susanna Zetterberg, a 19-year-old student from Stockholm, after picking her up in his unlicensed taxi outside a Paris nightclub in April 2008.

He denies the charge and claims police fabricated evidence used to indict him.