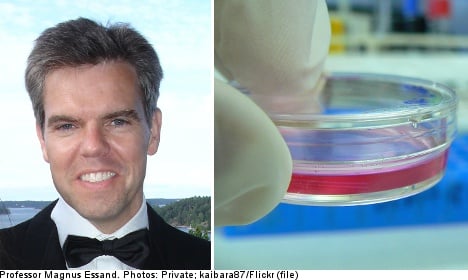 Professor Magnus Essand explains that he has been busy dealing with “worldwide attention” after his work featured in the Telegraph newspaper in the UK last Friday.

Essand has been working on a virus which he developed in 2010 and which has proven to remove cancerous neuroendocrine tumours in mice – the same type of cancer that killed Steve Jobs in October last year.

However, the process of developing the virus so it can be tested on humans and then put on the market comes with a hefty price tag – somewhere between 10 and 20 million kronor ($1.5 to 3 million).

As a result, the team has been forced to look elsewhere for sponsorship (together with the option of having the potential cure named after the donor) in what the team refers to as “the making of medical and fundraising history”.

The Local chatted to Professort Essand to find out more.

The Local: So what exactly is it that you’ve discovered and what does it do?

It’s a virus that we’ve designed not discovered. Specifically, it can multiply itself in neuroendocrine tumour cells. A virus is an intracellular parasite and it needs a host to replicate. We’ve tested it on cell cultures in an animal mode – so far with mice that have human tumours.

We saw promising results in the mice, and the next step is to test it on humans. The results were intriguing enough to do that.

What do you need to make it viable for human use?

It’s a virus and there are strict pre-requisites for bringing those to clinical trials. We need to take the virus and produce it for patients, and the testing for this is extremely costly. To produce it at clinical grade requires a certified company with a high class clean-room facility.

How hard is it to find a donor?

It is extremely hard. We need 10 million kronor…maybe up to 20 million. Standard grants are enough for the development of a virus and the testing of it in animals, but we need much more money to do what we need to do. National grants don’t suffice at that level, we’re looking for sponsorship at an industry level.

How does the virus work and what are the side-effects?

It infects a tumour cell, copies itself thousands of times, makes new viral particles which burst or lyse the cell, thereby releasing progeny virus that can infect neighboring tumour cell.

It then spreads through the tumour mass and attracts the host immune system to attack tumour cells. The theoretical side-effects are similar to the common cold, and much milder than chemotherapy.

How soon do you think this treatment could be available?

If we get the money, we will have to produce it, test it, write protocols, get permission from the Medical Products Agency (Läkemedelsverket), get a permit from the local ethical community.

If and when we get the money, it would be 18 months before we can actually start the phase-one trial, where we would find out the toxicity. The process is time consuming, involving many re-tests in our labs and then elsewhere. After all this, it has to be approved

Overall, it would be eight to ten years before it could be on the market. It’s a long road, indeed.