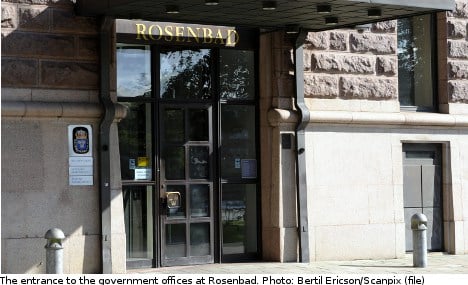 “The plan for how to protect the government has been lying dormant for a number of years. Now we are resuming the protection of the government offices,” said the head of the Life Guards, Stefan Jägerhult, to newspaper Metro.

The military has so far been lacking a plan of how to protect the government in case of a terrorist attack or an act of war by a foreign nation. However, the Swedish Armed Forces have now applied for permission to have officers carry out a reconnaissance mission around the Swedish government offices at Rosenbad and other key government buildings.

Security was tightened at the government buildings on Monday, according to Metro. Previously it was possible to access reception areas of the different ministries, but now the doors will remain locked.

The reconnaissance mission, scheduled for October, will be carried out by plain clothes officers.

“We are going to practice how we would act if something were to happen. It isn’t just terrorist attacks but we are looking at all sorts of scenarios,” said Jägerhult.

However, political scientist Stig-Björn Ljunggren told the paper that the protection of the government offices traditionally has been resting with the police, but that the threat has changed:

“There is no longer a distinction between enemies from within and enemies from outside of Sweden. Today there are enemies that can strike on the home ground and then the military can be deployed. Police and military have similar assignments today,” Ljunggren told Metro.