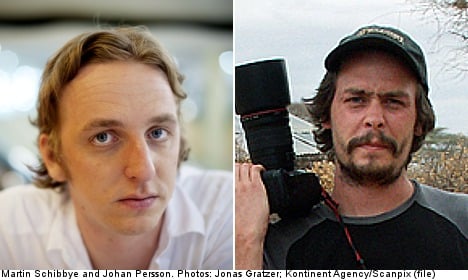 “They wouldn’t answer the questions. And then it was…’but if you don’t say anything we’ll shoot your friend.’ I know Johan passed out once when they pretended to execute Martin,” said Kjell Persson, father of Johan Persson to SVT.

On the SVT investigative news programme Uppdrag Granskning set to air on Thursday, the pair’s families speak out about what happened to the two Swedes while imprisoned in the infamous Kality-prison outside of Addis Ababa.

Linnea Schibbye Steiner, wife of Martin Schibbye, told SVT that her husband and his friend were made to stand with their backs to a man with a rifle and were asked the same questions over and over to make them confess:

“And when they didn’t, they tried to play them off against each other. They were told that ‘if you don’t confess we’ll shoot Johan’ or ‘we’ll shoot Martin’. And then they fired into the bush next to them.”

Sources have revealed to Swedish daily Dagens Nyheter that the account is corroborated by footage smuggled out by an Ethiopian defector who has since fled the east African country.

Uppdrag Granskning’s report also shows that the two Swedes had sustained more serious injuries during their arrest than what was previously reported.

Ambassador Jens Odlander, first to meet the two Swedes after they were captured by the Ethiopians, said they were very shaken when he first got to see them.

“They were awfully close to dying,” he told the paper.

Schibbye and Persson were arrested last year with rebels from the Ogaden National Liberation Front (ONLF) after illegally entering Ethiopia from Somalia.

The Swedes were in the remote southeastern region of Ogaden, populated mainly by ethnic Somalis, reportedly to investigate the activities of a company affiliated with the Swedish oil firm Lundin Petroleum.