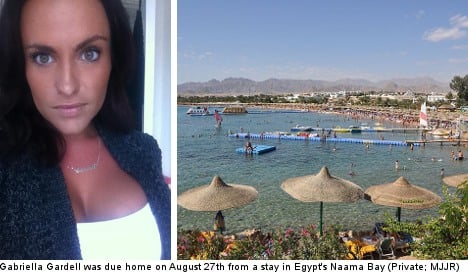 “I was so stressed and didn’t know what I should say. So I lied,” Gardell told the Aftonbladet newspaper.

Gabriella Gardell was reported missing in late August after she failed to return home from a holiday in tourist hotspot Sharm el-Sheikh. An international search warrant was sent out by the National Bureau of Investigation (Rikskriminalpolisen).

However, the 25-year-old eased her family’s minds by ringing them a few days later, explaining that she had found love and was planning to stay in Egypt.

“I found love, and I didn’t think about getting in touch. I am sorry that I have made people worry. I am impulsive,” she said at the time.

On Thursday, however, Gardell finally explained the truth to daily Aftonbladet – that she had never actually fallen in love and that she rather just didn’t want to come home to Sweden, and was recovering from the shock of losing her father to a heart condition.

“I hadn’t dealt with my crisis and wanted to do it in my own way, without contacting home. Now I can see that I didn’t act rationally,” she told the paper.

Gardell reportedly “dealt with her crisis” by hanging out with a group of Egyptians who showed her the town, taking her on day trips and to local restaurants.

While Gardell explained that extreme stress and low finances contributed to her rash decisions, the woman admits from the comfort of her mother’s home in Visby, eastern Sweden that she may have let her emotions get the better of her.

“I am foolhardy, adventurous and a little stupid perhaps,” she said.