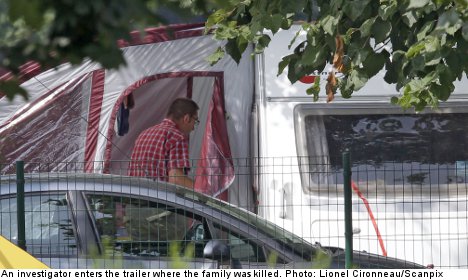 The 77-year-old woman who was shot dead last week together with her daughter and son-in-law, had suffered years of violence from her son, said the legal documents from Sweden.

The 46-year-old son had repeatedly “insulted, threatened and beaten his parents over a very long time”, said one document.

Police had been called out to their home in the southern suburbs of Stockholm eight times between 2001 and 2007. The 46-year-old son still lived at home because of mental health problems, the documents added.

In the transcript of one interview, the parents say they think their son might be schizophrenic.

The overall impression left by the documents is of an irascible individual, who lashes out physically as soon as he feels threatened.

In 2003, a Swedish court had the 46-year-old placed under guardianship and the following year his father,reported that his son had threatened to kill him.

In 2006, after the police were called out once again, The man had been transferred to a psychiatric unit for care. The following year he had been briefly detained after attacking his parents.

He was freed after they declined to press charges.

A source close to the French investigation confirmed his identity to AFP on Thursday.

Varg Gyllander, a spokesman for Swedish national police, refused to comment on any possible cooperation with the French police into the murder investigation.

The 77-year-old and her younger relatives were all killed in last week’s attack, near Annecy, on the edge of the French Alps, as well as a passing French cyclist.

The old woman’s seven-year-old granddaughter is in hospital, having suffered serious head injuries; her four-year-old sister, survived unhurt after hiding under the skirts of the dead women for eight hours.