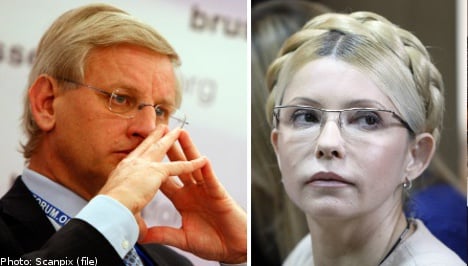 “Tymoshenko asked to see me in accordance with the rules of the prison authorities. We are now informed that this will not be allowed,” Bildt said via Twitter on Saturday.

He did not explain Ukraine’s decision while arguing that the former prime minister had the right to receive visitors for four hours per month.

“Request to see me was within quota,” Bildt wrote.

He later told AFP in the Black Sea resort of Yalta where he was attending a regional summit that he asked his Ukrainian counterpart about the denial and was informed that it was not a diplomatic decision.

An official spokesman for the foreign minister later told Interfax that his office was “not responsible for prisons” but still try to arrange a meeting with Tymoshenko for Bildt.

She and her other jailed allies have also been barred from standing in October 28th parliamentary elections because of the convictions.

Bildt issued a joint statement with two other senior European Union officials on Friday noting that Tymoshenko’s exclusion followed a trial that was neither fair or transparent.