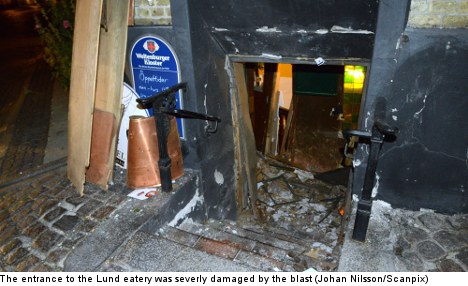 The shockwave from the explosion shattered a number of windows in the building that housed the restaurant, as well as other buildings along nearby streets.

“It spread both up the facades and out into the streets,” duty officer Hans Nilsson with the Skåne County police told the TT news agency.

“The damage near the restaurant entryway was extensive.”

The explosion took place at the entrance to the Rauhrackel restaurant on Stora Algatan, in the middle of Lund’s medieval district, about 20 minutes after midnight.

The restaurant was closed and empty at the time.

“We received a huge number of calls about the blast,” said Nilsson.

Emergency services carried out precautionary searches of apartments above the restaurant, as a great deal of broken glass had been blown into the dwellings. However, no injuries were reported as a result of the explosion.

“We don’t know of any threats against the restaurant or the owner,” said Nilsson.

“Nor is it clear what exactly exploded.”

Three patrol cars responded to initial reports of the explosion, and bomb-sniffing dogs were later called in to search for any remaining explosives.

Forensic experts from the police have since taken over the investigation, which is expected to continue throughout the day on Monday.

CRIME
Gangs in Sweden: How often are explosives used?
Url copied to clipboard!