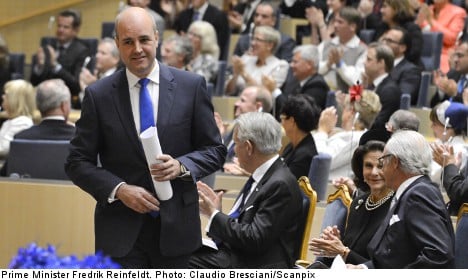 At a church service in connection with the opening of parliament Pastor Niklas Piensoho spoke about the faith placed in the MPs and the importance of looking after the trust that comes with the power.

”Everyone has sinned; in the government offices and in the Royal Court,” Piensoho said in his sermon.

“Character-flaws are democratically endowed upon the Swedish population,” he added, and warned about the dangers of self-importance blinding one from helping others.

“I pray that you will be leaders that create warmth in an ever more complicated society.”

The opening of the parliament began with a speech commemorating three MPs that recently died; Carina Moberg, Johnny Munkhammar and William Petzäll.

“This day is started with a note of sorrow. Three people have been taken from us much too soon,” said the speaker of the parliament, Per Westerberg.

In his speech the king mentioned the two Swedish journalists who arrived back in Sweden last week after being jailed in Ethiopia.

“I want to say that we are sharing the relief of Martin Schibbye and Johan Persson and their families now that they are safely back in Sweden,” the King said.

“Computers that previously would fill up several rooms can be carried around in our pockets today,” Reinfeldt said.

Reinfeldt said that Europe will be fighting for years to get out of the slump created by the recent financial crisis, but that the situation is different for Sweden because of the efforts of the current and previous governments.

“Important steps have been taken, but we need to be aware it will take time before the effects are felt,” he said.

“In these troubled times, Sweden can therefore choose another road than many other European countries.

Reinfeldt went on to outline another big investment; a 1.5 billion kronor ($228 million) cash injection into the Swedish legal system, making it some 10 billion kronor higher than in 2006.

“It is a big increase of the legal system capacity and we are expecting significantly improved results,” Reinfeldt said.

“This will provide strong incitement to increase investment into industry, which will lead to an increased productivity, higher salaries and a boost in employment,” said Reinfeldt, arguing that the government’s employment policies have been effective:

“Employment policies have had an effect, with a higher degree of employment despite a drawn out financial crisis that has affected unemployment. But there are still important challenges ahead.”

All Swedes will gain from growth and welfare, according to Reinfeldt.

“We will continue to have ambitious distribution policies,” he said and referred to statistics that show Sweden as one of the countries with the narrowest income gaps.