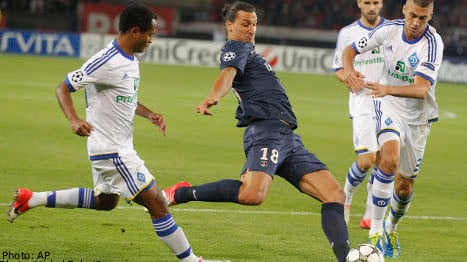 Ibrahimovic’s early penalty set PSG on their way to the three points against the Ukrainians, with Thiago Silva, Alex and Javier Pastore also on target for the hosts and Miguel Veloso grabbing a consolation for Dynamo.

Yuri Semin’s side were poor, and PSG will undoubtedly face stiffer tests if they are to progress in Europe this season, but Ibrahimovic insisted the Ligue 1 club deserved all the credit for winning in such fashion.

“To win 4-1 looks easy but it wasn’t easy,” said the Swede, who was in a relaxed mood after the game, having scored his 29th goal in the competition with a sixth different club, despite not having produced his best performance, in his own eyes.

“After the game people look at it and say the opponents were not good, but I think we made them look bad. It doesn’t mean they are a bad team.”

“We will take this confidence for the next game. When you play in the Champions League you grow as a team and also as an individual. This is a statement to France and the rest of Europe that Paris has quality and big potential to do something important.”

The former Barcelona and AC Milan man said that winning the group was not the most important thing, as long as PSG progress, but admitted that “after this result people are getting big hopes and putting us up there as one of the favourites.”

PSG now travel to Portugal in a fortnight to face Porto, who also won in their opening Group A game, 2-0 at Dinamo Zagreb thanks to goals from former Marseille midfielder Lucho Gonzalez and the Belgian Steven Defour.