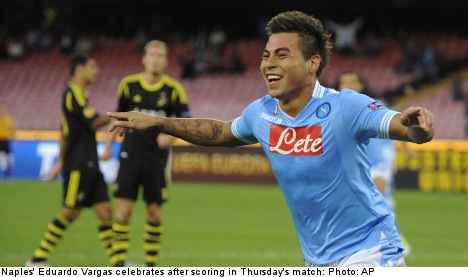 According to the ANSA news agency, the attacks occurred following Napoli’s 4-0 win over Swedish side AIK Solna in Group F of Europe’s second tier club event.

Police told the news agency the Swedish supporters were having dinner in Piazza Borsa after 11:00 pm when they were approached by a group whose faces were covered.

Two were stabbed in the buttock and leg and the third victim was admitted to hospital for tests. The wounds were believed not to be life threatening.

On Thursday police launched a hunt for what they called “pseudo fans” of Napoli who stabbed two Swedes and the owner of the pizzeria where they were eating after an ambush late on Wednesday night.

The reports said the pizzeria owner was injured while trying to defend the Swedish fans against “a group armed with baseball bats and knives”.

But he also likened them to similar incidents in the town in 2010 when hardcore “ultras” left three supporters of Liverpool in hospital with stab wounds.

On Thursday, a spokesperson for the AIK football club, Gabriella Blombäck, denied that the previous attacks were supporter related.

“It wasn’t an incident of supporter violence, but rather an example of what can happen in Naples,” she told the Expressen newspaper.