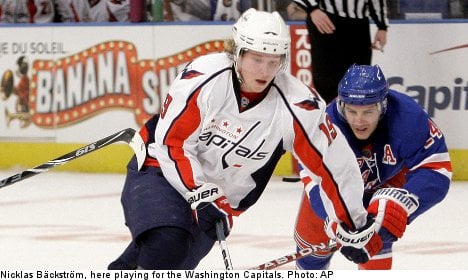 The North American National Hockey League (NHL) season has yet to start due to an owner-imposed lockout, leaving many players seeking other options, including playing in Sweden.

While some players have already signed deals with Sweden’s second division league, the Hockeyallsvenskan, NHL players are currently prohibited from joining teams in the top league, the Elitserien.

Previously, the league decided that its 12 teams could not offer short-term contracts to NHL players.

However, after reviewing the arrangement, the Competition Authority has ruled that the NHL player ban is invalid.

According to the competition body, the league has no right to dictate to member teams whether or not they can offer contracts to NHL players.

“The Hockey League’s decision can be likened to a cartel. The clubs’ joint decision to boycott certain players is not permitted under competition rules,” Swedish Competition Authority general counsel Per Karlsson said in a statement on Friday.

“Each club must be able to make their own independent decisions about investments.”

The Competition Authority furthermore warned that if the league fails to lift the ban, it would be fined 20 million kronor ($3.06 million).

The agency emphasized that the decision is only temporary, but will remain in force pending the completion of it continuing investigation into the matter.

The NHL lockout began on September 15th this year after the collective bargaining agreement expired. The season was scheduled to commence on October 11th and the pre-season has already been cancelled.