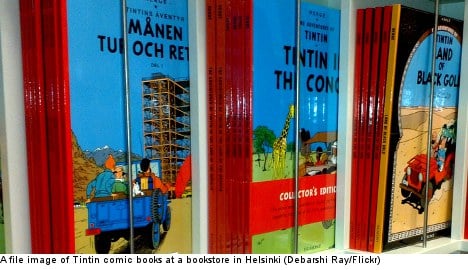 Tintin fans visiting the Kulturhuset youth library in Stockholm may be disappointed after the library announced that the books have been stripped from the shelves.

“The image the Tintin books give of Africans is Afro-phobic, for example. Africans are a bit dumb, while Arabs sit on flying carpets and Turks smoke water pipes,” explained Behrang Miri, who is in charge of the youth department in the library, to the Dagens Nyheter newspaper (DN).

When the children read books like Tintin, Miri argues that they don’t stop to consider the stereotypical characters featured within the pages.

“Children don’t read the fine print, they just get into the story immediately. The biased picture is stigmatizing. Tintin provides a caricature with a colonial perspective. Young children absorb the information uncritically,” he told DN.

Meanwhile, staff at the library is working on investigating the content of other children’s books in the department in the aim of giving a consistent image for their readers without stereotypes, genders issues, or homophobia.

Even the adult literature is getting a thorough re-reading, with Miri hoping to provide better role models for the immigrants in the area, and a better reflection of their culture for the readers.

“All children’s literature should be reviewed,” he told the paper.

“Even adult literature. Many people from African countries are living here today, but we don’t know enough about them.”

Tintin was created by Belgian artist Georges Remi and revolves around Tintin, a young investigative journalist who travels the world solving mysteries.

The comics, published between 1930 and 1976, have been translated into over 50 languages and sold over 200 million copies. Steven Spielberg directed a motion capture 3D film version in 2011, The Adventures of Tintin: The Secret of the Unicorn.