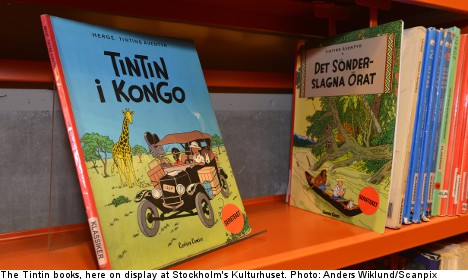 The reversal comes after a report in Tuesday’s Dagens Nyheter (DN) newspaper in which Miri said the library planned to remove Tintin comics from its shelves.

“The image the Tintin books give of Africans is Afro-phobic, for example. Africans are a bit dumb, while Arabs sit on flying carpets and Turks smoke water pipes,” he told the paper.

But after criticism of the move erupted in Swedish media on Monday morning, Miri changed his stance.

“I wanted to highlight an opinion piece about issues of discrimination, but realize now that it’s wrong to ban books,” Miri said in a statement.

However, Kulturhuset head Sjöström applauded Miri for prompting a discussion about discrimination.

“The issues of discrimination, equality and norms continue to be debated and discussed,” Sjöström said in a statement.

“Behrang Miri is employed as an artistic director for children and young people for all of Kulturhuset, with a stated role of developing its artistic content. His mission is to continue working with issues of discrimination and I support him fully.”

Among those who slammed Kulturhuset’s Tintin ban was Fredrik Strömberg, chair of the Swedish Comics Association (Seriefrämjandet).

“I think it’s wrong. I don’t think people should censure in this way, children are smarter than that. It’s better to talk about the stupid things we have done than to hide them away, that would be the mistake,” he told the TT news agency.

Strömberg argued that people have a strong fear of what children are shown, especially when it comes to pictures.

“The same things in words don’t seem to get such a reaction from people. There’s no one who cleans up Astrid Lindgren because of her Negro kings,” he said.

In Lindgren’s popular Pippi Longstockings books, the main character’s father was said to be a Negro King from the south seas – an issue some publishers have chosen to edit in English to “A king of the south seas”.