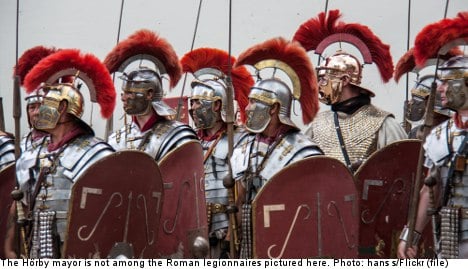 “I have met the artist on many different occasions and we had discussed a painting. I thought it sounded very interesting. He then sent in a proposal that was presented to the Hörby industrial property board,” mayor Lars Ahlkvist of the Moderate Party told local paper Skånska Dagbladet.

According to the paper, the painting was never put out to tender but was commissioned during a number of meetings between Hörby municipality’s top brass and the artist in question.

The costs of the 600,000 kronor fee are supposed to be shared between the municipality and the industrial property company.

The painting, depicting Ahlkvist dressed as a Roman legionary, is to be part of a larger mural in the council building.

In addition to the Roman-style mayor, the painting also features a local financier depicted as Sweden’s King Karl XI and his partner as a noble lady of the same time.

Speaking with the Svenska Dagbladet (SvD) newspaper, Ahlkvist explained that Hörby has a “rich tradition of adornment”.

While he admitted that the only connection between Hörby and the Roman empire was “through the church”, Ahlkvist explained the mural was meant to connect the past with the present.

“In the painting, Jesus is escorted by a modern police officer,” he told SvD.

“We’ve got the Arab Spring, as well as a team of snapphane from Hörby,” he added, referring to 17th century pro-Danish guerrillas that fought against the Swedes.

Despite the controversy surrounding how the painting was funded, Ahlkvist emphasized that art should “prompt debate” and that the ensuing publicity could benefit the town.

“Clearly, Hörby has gotten a lot of attention and that is never a bad thing,” he said in reference to the mural-inspired media debate.

The city manager for Hörby, Arne Bertilsson, is satisfied that the commissioning of the painting was done above board.

He contends the city didn’t have to put the assignment out to tender since it required specialist skills – that of “monumental art”.

“That’s why we decided to use the existing exceptions to the rules in the procurement laws which gave us the right to contact and chose one artist only,” he wrote on the municipality website.

According to Skånskan, the law states that those commissioning such a special piece of art should have adequate expertise, something Ahlkvist is adamant he has:

“I feel that I am familiar with art. I come from a family of artists and have spent a lot of time on it,” he told Skånskan.