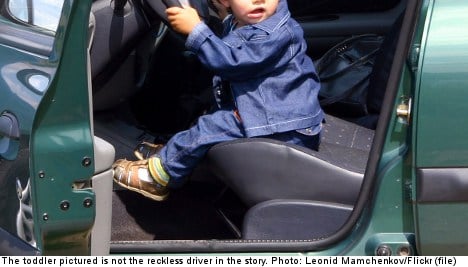 While his mother slept soundly on Tuesday morning in their home in Gärsnäs, southern Sweden, the child carried out his daring auto theft and took to the streets.

Nott long after, there was a knock at the front door of the woman’s house.

Outside, a local shopkeeper was standing with the woman’s four-year-old, who had been found over 400 metres away after causing in a minor car accident.

“When she explained that my son had been out driving the car I thought it was a terrible joke at first. I couldn’t believe it was true,” said the mother to the local Ystads Allehanda newspaper.

The four-year-old travelled almost half a kilometre and succeeded in making three right turns before crashing into a truck, a journey that baffled the police and the boy’s mother.

“I have no idea how he managed, he’s never driven a car before,” she told the paper.

The boy’s mother was also shocked to learn that her son had even managed to get into the car, let alone drive it.

“I had the car keys in my jacket pocket and it was hanging so high that I thought he couldn’t reach it. But he did. Don’t ask me how, I was asleep,” the woman said.

Meanwhile, local police were bamboozled by the story, having never before encountered such a young and reckless driver before.

“It’s quite a feat to go 400-500 metres and make three right turns,” said Lars-Bertil Mårtensson of the local police to the paper.

The police have chosen not to report the incident to authorities, but are glad that no one was injured.