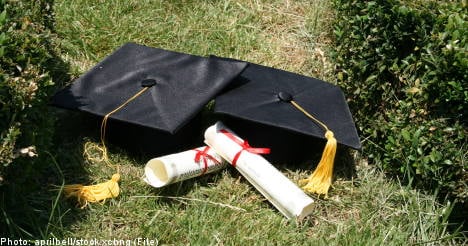 “But we were pleasantly surprised that so many actually answered they were working or studying,” said Lars Peterson of the agency to The Local on Wednesday.

Peterson, who heads the department that deals with validating foreign university degrees, told The Local that Sweden would benefit from offering foreign jobseekers with degrees from abroad more supplementary courses, internships, and specialized language classes aimed for a particular profession such as “Swedish for engineers” or “Swedish for teachers”.

“It is incredibly important that measures are implemented focusing on finding the ‘right’ job for these individuals rather than just any job,” he said

The survey showed that many use the degree validation process as a starting point in planning their continued career in Sweden, either to study or to work.

Some 78 percent of respondents said that their aim was to look for work, while 100 people indicated that validation was crucial for their continued academic studies.

Meanwhile, 90 percent of those who answered said that they are currently working or studying, while 37 percent are looking for work.

However, out of those that are already employed, only 32 percent said that their work completely or partly matched their level of education.

“There are studies that point to people getting stuck in a job at the wrong level if they just accept any job to be able to support themselves,” said Peterson.

The study also showed that most of those that seek to have their qualifications validated are quite young: almost 62 percent are under 36 years of age and only 11.5 percent are over 45.

Almost 80 percent seek to have their academic documents validated within five years of arriving in Sweden.

Out of the applicants 65 percent are women and 35 percent men and among the applications are found degrees from 137 countries. The majority come from Iraq, followed by Iran, Russia and Poland.

According to Peterson there were some surprising findings in the report:

“We hadn’t realized what an impact the recognition of their qualification played in these people’s lives,” he explained.

“Many answered that they felt that once their degree was validated they were strengthened in their professional roles, as their competencies were formally recognized.”

The survey also showed that applicants felt that having their academic qualifications validated didn’t just make it easier when planning more advanced studies or looking for work, but greatly simplified other administrative processes, such as joining a union or an unemployment insurance scheme (a-kassa).

Another surprising finding from the study was that the validation of their degree also affects applicants’ self-esteem:

“It was really an amazing read. The words that kept turning up in the answers were self-confidence, pride, respect and belonging,” said Peterson.

“Before, many felt that their skills had been in doubt, their qualifications put into question, or that they were overlooked as they weren’t formally recognized.”