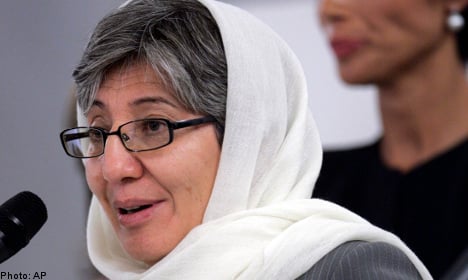 Samar, 55, was honoured “for her longstanding and courageous dedication to human rights, especially the rights of women, in one of the most complex and dangerous regions in the world,” the jury said in a statement.

A medical doctor by training, Samar fled to Pakistan in 1984 when her husband disappeared following his arrest by Afghanistan’s communist regime.

She returned in 2001 to become her country’s first minister of women’s affairs, but had to resign after just six months after she criticized sharia law in an interview in Canada.

She was in 2002 named the head of the Afghanistan Independent Human Rights Commission, which she still leads, and was from 2005 to 2009 the UN special rapporteur on human rights in Sudan.

Samar shares the 2012 Right Livelihood Award with American political theorist Gene Sharp, 84, whom the jury described as “the world’s foremost expert on non-violent revolution”, and a non-governmental organization campaigning for an end to British arms exports, Campaign Against Arms Trade.

An honorary prize was awarded to 90-year-old Hayrettin Karaca, “considered the grandfather of the Turkish environmental movement,” the jury said.

Swedish-German philatelist Jakob von Uexküll founded the donor-funded prize in 1980 after the Nobel Foundation behind the Nobel Prizes refused to create awards honouring efforts in the fields of the environment and international development.

For this reason, the Right Livelihood Award Foundation often calls its distinction the “alternative Nobel prize.”