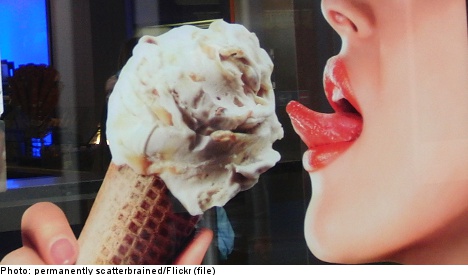 It was a fellow motorist in a caravan who noticed that a woman was straddling the driver of an open-topped Porsche zooming down the E4 motorway near Linköping in central Sweden at the end of July.

When the car passed the shocked caravan driver at what he estimated to be 80 kilometres an hour, he realized that the woman was not only without a seat belt, but was sitting on the drivers lap facing him, something he considered to be potentially hazardous for other drivers.

When police responded to the call and pulled over the Porsche, they noticed that the woman quickly switched to the passenger’s seat.

They also noted she wasn’t wearing any pants, according to the local Corren newspaper.

When confronted about why she was not in her seat, the half-naked woman told police that she was simply licking off icecream that had spilled onto the Porsche

During subsequent questioning, the man claimed he and the woman were being “a little naughty” and that his passenger was just “kissing away the ice cream”.

The woman later admitted, however, that she was doing “a little more than just clearing up the ice cream from the man’s face and body,” wrote the paper.

Now, both the man and woman have expressed regret over their actions, and acknowledge the risk they caused to other drivers, referring to their frisky frolicking as “impulsive” and “incredibly stupid”.

The man was ultimately slapped with a 22,800 kronor ($3,474) reckless driving fine for the episode of motorway madness, while the woman was ordered to pay 8,400 kronor for her tongue-lashing antics.