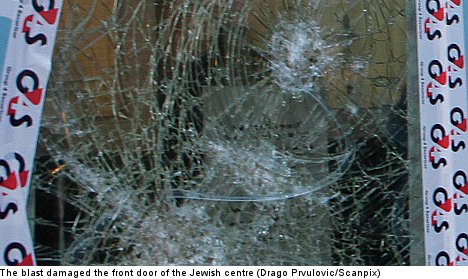 “There as been an explosion. Something has detonated – we are certain of that,” said police officer Erik Liljenström to local paper Sydsvenskan early on Friday morning.

The police received a call shortly after 1am. Witnesses said they had heard loud blasts near the centre some 15 minutes earlier.

When police arrived at the scene they soon established that there had been some sort of explosion and that someone had tried to smash in the door.

There were loose paving stones lying among shards of shattered glass in front of the entrance, according to the paper.

While damage had been done to the front door, the building had not been damaged in any other way as far as the police could see, but according to witness statements the blasts were heard a few blocks away.

“I’m shocked that it’s happened now; that it’s happened at all. Jewish institutions are under constant threat, but we haven’t noticed anything out of the ordinary recently,” Fred Kahn, head of the Jewish community in Malmö, told the TT news agency on Friday morning.

Shortly after 4am, police announced that they had identified one of the vehicles and brought two men in for questioning.

Both of the suspects are 18-year-old, according to Malmö police, who nevertheless believe that more people were involved in carrying out the attack.

No one was reportedly injured in the attack. According to the police, the men are under suspicion of destruction constituting a public danger.

“Now their going to be interrogated, then we’ll see. They weren’t caught in the act,” police spokesperson Anders Lindell told the TT news agency.

On Friday, Malmö’s Social Democratic mayor Ilmar Reepalu, who has previously been criticized for making controversial statements about the city’s Jewish community, condemned the attacks.

“It’s a terrible incident which damages different groups in Malmö as well as Malmö’s brand,” he told the TT news agency.

“It’s terrible and shocking when things like this happen.”

Reepalu added that he hoped police would be able to solve the crime quickly and that it doesn’t lead to heightened tensions in the city.

“This is a criminal act,” he said.

Earlier this year, Reepalu came under fire for comments in which he claimed that the far right Sweden Democrats had “infiltrated” the Jewish community in Malmö.

The comments were followed by a visit to Malmö from US President Barack Obama’s Special Envoy to Monitor and Combat anti-Semitism, Hannah Rosenthal, who said there is “no excuse” for using anti-Semitic language.

In 2009, comments by Reepalu prompted the the Simon Wiesenthal Centre in the United States warned Jews from traveling to Sweden’s third largest city.