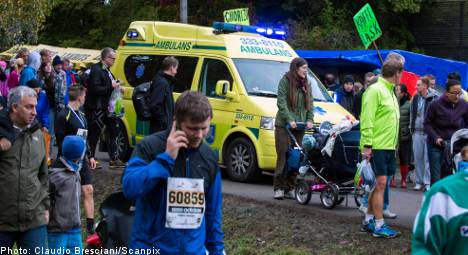 The man was taking part in the 15 kilometre race across a trying cross country route through the island of Lidingö in eastern Stockholm, according to a report in the Svenska Dagbladet daily.

“Unfortunately one person collapsed during the race. He was given help there and was then driven to hospital, but died,” said Elisabeth Hansson at the race organizers to the newspaper.

The emergency services were called at 12.52pm and the first ambulance arrived at 1.19pm, although ambulance staff already on site at the location attended to the man within two minutes, according to Hansson.

A further person has been taken to hospital in connection with the race, but is reported to be in a stable condition.

It is not the first time that runners have died during races in Stockholm in recent years.

Two men died while taking part in the 10 kilometre Midnight Run in 2010, prompting an investigation by Stockholm county council.

The council responded to media reports that a 26-year-old man had been turned away from a local Stockholm hospital because it was full.

The Lidingö Run is the world’s largest cross country race, with classes from junior to veteran and distances spanning from 4 to 30 kilometres.

The 30 kilometre race is the undoubted highlight, having been run since 1971 and forming part of the Swedish Classic .