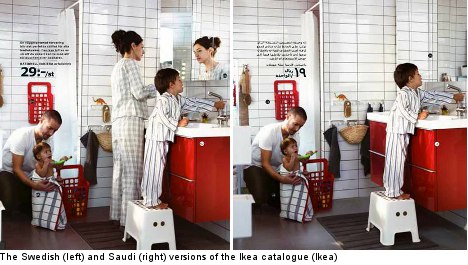 In the Saudi version of Ikea’s annual furniture booklet, all the women who appear in the catalogue published in other countries have been removed via photo retouching.

The altered images caused a stir when revealed in Swedish media, prompting an apology from Ikea’s head office in Sweden.

“We apologize and understand that people are upset,” said Ulrika Englesson Sandman, a spokeswoman for the Inter IKEA Systems, which owns the Ikea trademark and concept, to the Expressen newspaper.

“This is really unfortunate. We have been in contact with Saudi Arabia to discuss this issue. It should be possible to balance Ikea’s values so that we don’t discriminate people. At the same time, we try to adapt to the cultures and the legislation that are there,” she told Sveriges Radio (SR).

The removal of the women, including a young girl who was pictured studying at her desk, has prompted a strong response from many prominent women in Sweden:

“You can’t remove or airbrush women out of reality. If Saudi Arabia does not allow women to be seen or heard, or to work, they are letting half their intellectual capital go to waste,” Swedish minister for trade, Ewa Björling, said in a statement.

“It’s impossible to retouch women out of reality,” she told the Metro newspaper.

Her sentiment was echoed by Sweden’s European Union Minister Birgitta Ohlsson, who branded the incident “medieval” on the social networking site Twitter.

Even the image of a female designer who helped design the company’s “PS” line of home furnishings has been removed from the Saudi catalogues.

Saudi Arabia applies strict rules of gender segregation, banning women from driving and requiring them to have permission from a male guardian before travelling or receiving medical care.

Ikea’s Saudi franchise partner currently operates three stores in the country, where it has seen “double digit” yearly growth over the past five years, according to its website.