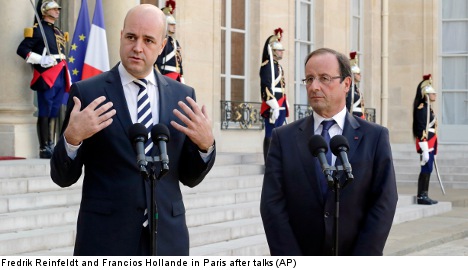 “It creates a system whereby those who earn huge amounts of money by taking great risks in the banking sector learn that they can send the bill to taxpayers in other parts of Europe,” Reinfeldt told the Aftonbladet newspaper following talks with Hollande in Paris.

Reinfeldt admitted, however, that Europe’s banks need to have better oversight.

“There’s a point to having better oversight, but the proposal is a work in progress,” he told the paper.

Overall, Reinfeldt characterized the talks as positive, stressing that he and France’s Socialist president shared similar views on a number of issues.

However, it remains unclear exactly how Monday’s talks may play into tough EU negotiations set for later this autumn over banking rules and the budget.

“I think he wants to understand our reasoning and I’ve done a good job of conveying Swedish interests. But it’s too early to say where we’ll end up,” Reinfeldt told Aftonbladet.

Hollande said that a European banking union should be governed by “very precise rules” following the meeting with Reinfeldt.

“He does not want citizens of our countries to be forced to take part in rescuing banks for which they are not responsible,” he added.

“We therefore must have very precise rules and guarantees.”

Sweden belongs to the 27-member European Union, but not to the 17-member eurozone.

France is an ardent supporter of plans for a European banking union, while Sweden is among its opponents.