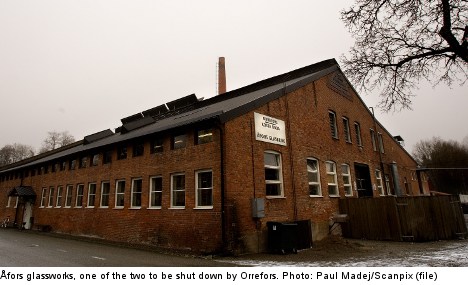 New Wave Group, owner of Orrefors Kosta Boda (OKB), on Tuesday issued a profit warning as it announced that glassworks located in Orrefors and Åfors would be shut down.

“With the present economic uncertainty and economic development we don’t see any possibility to achieve an acceptable profitability during a foreseeable future without taking extensive measures,” the New Wave Group said in a statement.

Between 2008 and 2012, New Wave Group has invested around 300 million kronor ($45 million) to cover loses at OKB but has yet to help return the operation to profit.

The company also cited the strong Swedish krona as having a negative impact on OKB’s export business.

As part of a turnaround effort estimated to cost 212 million kronor, the company plans to move glass production to the glassworks located in Kosta and attempt to sell the shuttered facilities.

OKB will also receive a new CEO in conjunction with the restructuring effort, with Magnus Andersson, most recently CEO of Nimbus Boats, set to take over as CEO on November 5th.

New Wave Group chief financial officer Lars Jönsson said that it wouldn’t be impossible for new owners of the glass factories in Orrefors and Åfors to continue production at the facilities, but only on a much smaller scale.

“There may be smaller players who can take over part of it and that would present possibilities, especially in Orrefors. There are hopes that new commercial operations can be started in these facilities, but on a smaller scale,” he told the TT news agency.

In addition to concentrating its production at the Kosta glassworks, New Wave Group will also start purchasing finished glass and crystal from other producers.

“We’ll reduce our costs significantly by not having production. That will also allow us to better adjust to economic ups and downs,” he told TT.

The company expects the restructuring will return OKB to profit by the fourth quarter of 2012 and hopes the measures will ensure the survival of the Orrefors and Kosta Boda trademarks, as well as glass production in Sweden.

The glassworks in Orrefors was established in 1898 in the same location where an ironworks had been in operation since the early 1700s.