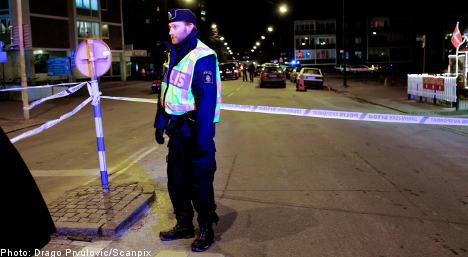 The man was convicted for murder and aggravated weapon crimes following the attack in Malmö on January 31st where father of four Ahmed Hadrous was shot dead in his car.

Two suspected accomplices were acquitted by the Malmö court, however, one of whom was believed to have paid for the murder, and the other for protecting the shooter after the crime.

Hadrous was shot while sitting in the driver’s seat of his car in a parking place on Fosievägen on the south side of Malmö.

Six shots were fired in quick succession from close range, with a shot to the head being the ultimate cause of the death, wrote the Aftonbladet newspaper.

The incident marked the sixth fatal Malmö shooting between November and January.

The convicted man was tied to the murder by forensic evidence, whereby traces of gunpowder were found on his belt. Witness statements also confirmed that the man owned a gun similar to that used in the shooting.

The ruling will most likely be appealed, according to the sentenced man’s defense lawyer.

“I will talk with my client about it, but I find it hard to imagine that it won’t be appealed,” Karsten Nyblom told the TT news agency.

There was not enough evidence, however, to convict the 53-year-old man believed to have ordered the murder, allowing him to walk free.

The 53-year-old man, who is referred to both by himself and by others as a “godfather” with contacts and influence among a number families and criminal circles in Malmö, allegedly tried to get another man to kill the 48-year-old three years ago.

Altogether, according to the court, several circumstances point towards the “godfather” being the ringleader in the murder, but the evidence was considered to be too weak to convict him. Furthermore there was no information of a conceivable motive behind the murder.

The court also acquitted a 20-year-old woman suspected of being an accomplice to the murder, ruling that, since the two lived together prior to the killing, there was nothing out of the ordinary in the fact that she housed the 21-year-old and washed his clothes after the shooting.

As the indictment alleged that the 53-year-old enticed the 21-year-old to carry out the shooting in exchange for repaying a debt, the acquittal of the “godfather” also cast doubt on prosecutor’s suspected motive for the shooting.

“There is no motive anymore. There are, above all, many questions that need to be answered. One doesn’t even know with one hundred percent certainty which weapon was used,” defence attorney Nyblom told TT.

Prosecutor Anna Palmqvist said it was too soon for her to decide whether or not to appeal the ruling.

She had sought a life sentence for the 21-year-old.