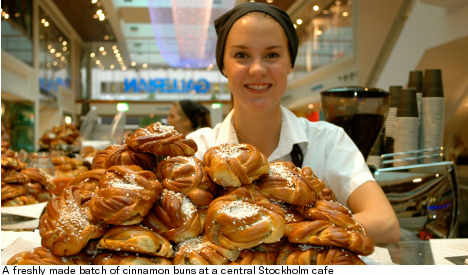 The opportunity to sink ones teeth into a warm, tasty concoction of cinnamon-infused dough is also popular among tourists who happen to find themselves in Sweden in October.

“It’s a typical Swedish thing that a lot of tourists have heard about,” Isabella, a worker at the Gateaux coffee bar in Stockholm’s Gallerian mall, told The Local.

Cinnamon Bun Day is a fairly recent tradition, created in 1999 by the Hembakningsrådet (Home Baking Council).

The group decided that creating a national cinnamon bun feast would be the best way to celebrate the organization’s 40-year anniversary.

Today, a mere 13 years later, most people consider Kanelbullens Dag as much of a Swedish tradition as Midsummer or the Nobel Prizes.

“It’s a good day here in Gamla Stan because of the tourists,” she told The Local.

She explained that tourists remain captivated by Sweden’s famous cinnamon buns and are curious to find out how a pastry came to have its own national day.

While it’s hard to come by statistics on exactly how many cinnamon buns are downed in Sweden on October 4th, one bakery in Eskilstuna in central Sweden claimed that they sell 50 times more buns on Cinnamon Bun Day compared to a regular day.

“In my eyes, the cinnamon bun is the optimal pastry. It’s like everything fits. The shape, the flavouring…everything,” baker Magnus Spångberg at the Konditori Alexandra bakery told the local Eskilstuna Kuriren newspaper.