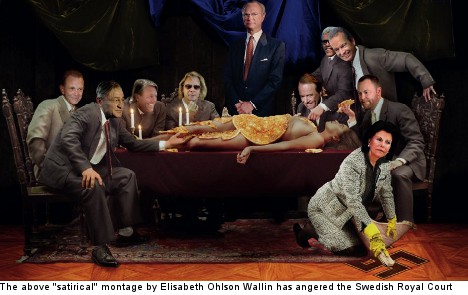 “I understand that the royal family felt the need to put their foot down, but I have no intention of issuing a formal apology or retracting the picture,” artist Elisabeth Ohlson Wallin told The Local.

“I’m sure it’s hard for them to have to revisit all the things associated with the picture, but it’s a work of satire.”

The image at the heart of the controversy, which appeared earlier this week in a magazine published by the Social Democratic party, is the third in a series of satirical works by Ohlson Wallin depicting powerful Swedes.

In the picture, the king is shown staring over the naked body of pop singer Camilla Henemark, together with a group of people eating pizza off her.

Several of the men sitting around Henemark also figured in “Carl XVI Gustaf – Den motvillige monarken” (‘Carl XVI Gustaf – The reluctant monarch’), an unofficial tell-all biography that rocked the Swedish royal family when it was published two years ago.

In book claimed that the king and Henemark had been lovers and also included details about alleged visits to strip clubs and connections to suspected mobsters.

“There is a limit to how much anyone should have to endure. The picture is offensive, hurtful and malicious,” the Marshal of the Court, Svante Lindqvist, said in a statement following the picture’s publication.

The editor of Tiden, the magazine that published the image earlier this week, defended his decision to publish the image but told the TT news agency he was “prepared to take the punishment” if the move is eventually ruled illegal.

Ohlson Wallin was acutely aware of how explosive the image might be, having deliberated for more than a year before finally deciding to make the work public.

“Usually satire is done using drawings, but this is a montage of photographs which makes it more striking,” she said.

She pointed out, however, that all the images included in the work had been published previously, but in other contexts.

According to Ohlson Wallin, who stressed she’s “not an ardent anti-royalist”, part of what makes the image so controversial is that Sweden lacks sophisticated culture of satire.

“We don’t have enough satire in Sweden. It’s underdeveloped. We don’t dare to speak up and stir up debate,” she said.

Ohlson Wallin is no stranger to controversy, having made headlines this week in Serbia with her exhibition “Ecce Homo”, featuring photos portraying Jesus among homosexuals.

The exhibition, organized as part of Belgrade Pride Week, opened Wednesday under heavy security and resulted in the banning of a planned gay pride parade.