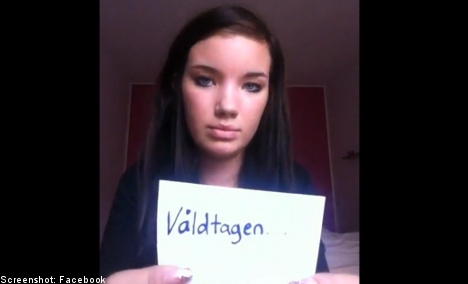 “I am 14 years old. Only 14 years and four months. Something terrible happened to me,” Lovisa Nystrand begins her tale in the video.

Nystrand, who hails from Linköping in central Sweden, was friends with a boy several years her senior. In August, when at his house, she was raped, according to Nystrand.

She reported the incident the same night and on Wednesday her friend was sentenced to two years in prison for child rape.

Nystrand initially only intended to share the video with close friends to cut short insinuations that she may not have been an innocent victim but then decided otherwise.

CLICK HERE to see the video with accompanying English translation

A day after she put the three-minute video on Facebook it had already be seen by at least 26,500 people.

More than 600 users commented, most of them expressing compassion and support.

In “How it happened” Nystrand faces the camera and shows small pieces of paper on which she had written details about her ordeal.

“A lot of people wrote and said they had been raped but did not dare report it to the police,” Nystrand told the online edition of the mass circulation Aftonbladet .

Contacted by the online edition of the tabloid Expressen, psychologist Christina Fischler said it was “normal that somebody using social networks would seek support” there.