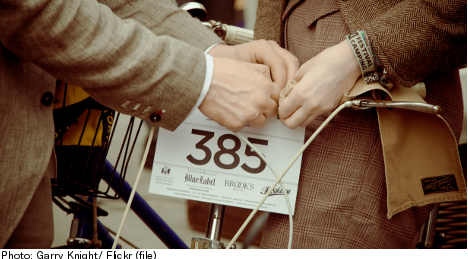 No longer just in fashion though, at least for a collection of Stockholm-based cyclists who have channeled their love of vintage fashion and cycling into Bike In Tweed, an annual ride set to take place in Stockholm on Saturday, October 6th.

“Bike in Tweed exists in different forms all over the world,” Carlos Saldes, head of the Bicycle Historical Society (Cykelhistoriska Föreningen), told the Local.

He explained that the phenomenon was pioneered in the UK, but has since been replicated as far afield as the United States and Japan.

And since last year, sartorialists with a love of classic two-wheeled contraptions have also had an outlet in Sweden for their passions.

“Having it take place in a beautiful city such as Stockholm is really important to its [continued] success,” said Saldes.

Stockholm’s Bike In Tweed combines a longing for 1920s-era clothing and pre-war bicycles by organizing a leisurely tour through the Swedish capital.

Though the event is only in its second year, Saldes is confident that it will meet its goal of attracting 250 participants.

The event begins at Kungsträdgården at 1pm on Saturday, where contestants will gather to size up the competition.

The tweed-wearing cyclists will zip past a number of Stockholm’s scenic areas, with a traditional Swedish “fika” planned for Gamla Stan.

For 150 kronor ($23) entrance fee, anyone can dust off their khakis, grab grandpa’s old wool hunting coat, and cycle on down to partake in this year’s Bike in Tweed.

“This race is special in Stockholm because we are interested in the 1920s to the 1950s,” said Saldes.

While all contestants will be expected to look dapper, prospective winners must not only think about choosing a vintage bike, but also about dressing themselves in fashion to reflect times gone by.

“Both clothes and bike will determine the winner,” Saldes explained.

As success in this “race” will be measured in style and grace, rather than speed, Saldes has some simple advice for those who fancy themsleves worthy of taking home this year’s title.

“Above everything the winner has to look beautiful,” he said.