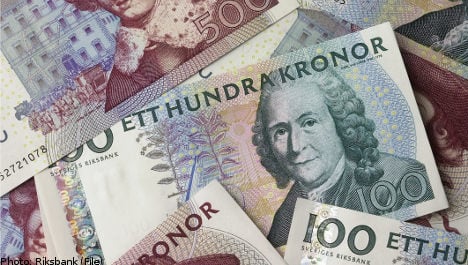 As a result, more and more wealthy Swedish tax dodgers are now coming forward to pay up their tax debts.

In 2011 the net inflow of private capital to Sweden grew five-fold, from two to 10 billion kronor ($300 million – $1.5 billion), according to figures from the Swedish Tax Agency (Skatteverket).

Over six billion kronor have come in from Switzerland and Luxembourg alone.

“In 2011 there was a heavy net inflow of capital for individuals, and that net inflow comes specifically from the countries with which we have established information exchange agreements”, Margaretha Nyström of the Swedish Tax Agency told the Dagens Nyheter (DN) newspaper.

In October 2010, the Swedish government signed a deal with Luxembourg giving Swedish authorities the right to demand that banks in Luxembourg hand over information about their customers’ assets.

Such deals are part of the reason behind the large inflow of capital into Sweden. Another explanation is that Swedes with money hidden abroad are now allowed to move that money home to without receiving tax penalties.

The individual concerned must then register a correction and pay taxes for the past five years.

“There are corrections where the capital for a single individual has reached up to 100 million kronor,” said Margaretha Nyström.

“One should be aware that these people have paid tax on the capital in the country where it has been kept. They have the right to claim deductions in the foreign state. Sometimes it concerns inherited money that was placed abroad as far back as the Second World War, and that has now been brought home.”

Nyström added that tax dodgers are aware that the authorities in Sweden are now able to get more information about their assets.

The Swedish Tax Agency’s investigations generate an average of 500 million kronor a year in taxes and surcharges.